Led by New Milton Town Council – the local community, businesses and land interests are working together to regenerate New Milton with the focus on the Town Centre. The vision is for a vibrant town centre with many different uses, not just retail – that is a meeting place and social hub for all ages.

Giving the community a say in development

After 5 years of consultations, local people voted for the New Milton Neighbourhood Plan to be adopted as a legal part of the statutory Development Plan, as ‘a material consideration of weight for decision making purposes within the New Milton Parish’.
88% voted in support (35.7% turnout).

With this Plan, we can ensure a strong and sustainable future for our Parish: with affordable new homes, new community buildings, new green spaces – while driving innovation and new employment opportunities. Something for everyone of all ages.

A blueprint for an exciting future

The Neighbourhood Plan sets out:

With the Neighbourhood Plan adopted, the Parish also benefits from increased developer contributions for investment in local infrastructure, known as Community Infrastructure Levy. 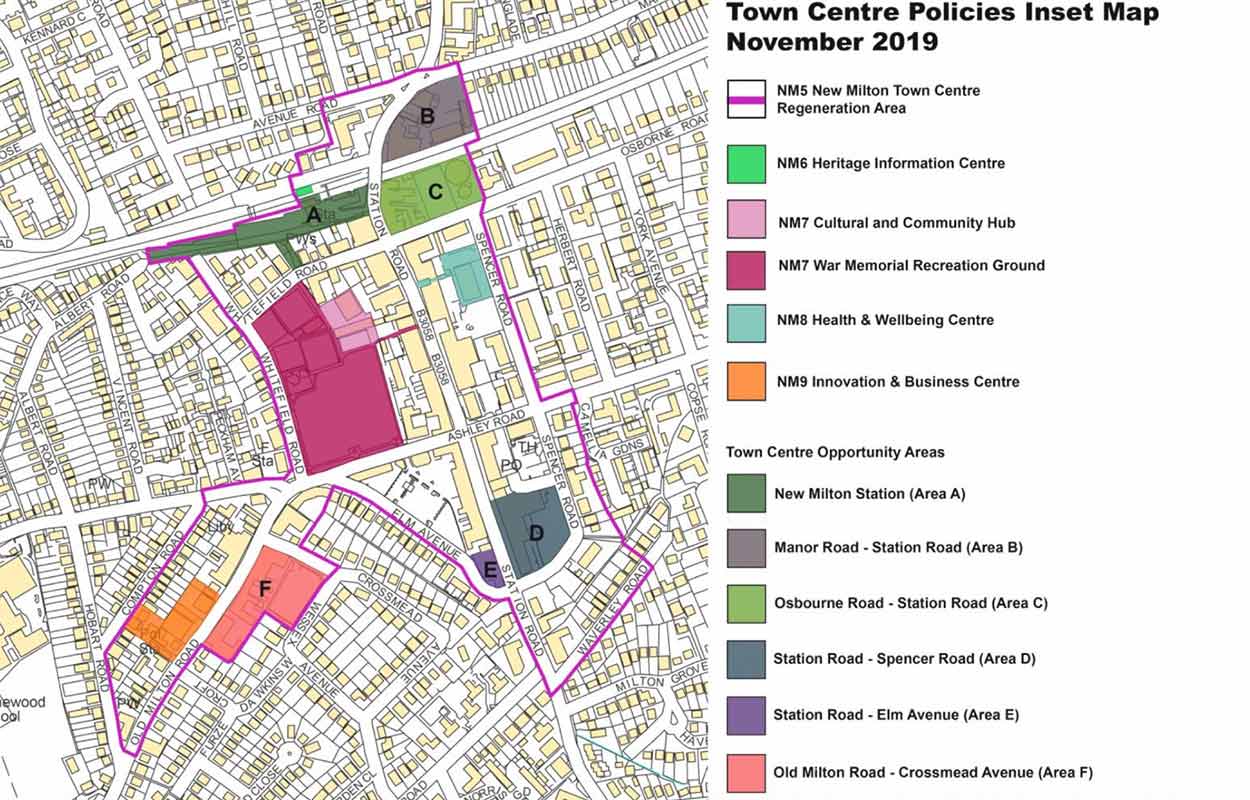 A sustainable town with a more balanced age profile.

The focus is on a vibrant town centre that is a social and economic hub for shopping, living, working and leisure – with new shops and eateries, a wellbeing centre, an iconic community hub, a heritage centre and flexible office space – all set within an attractive environment that’s easy to get around and more connected to the green space of the Recreation Ground.

How will we deliver the Community Vision?

A site has been offered, by Double H, to New Milton Town Council for £100,000. It was agreed at a Town Council meeting on 28 June 2021 that this offer should be accepted subject to outline planning permission being granted. The Town Council is awaiting re-assignment of the land, currently designated as green belt, for development for community uses.  Positive feedback was received from New Forest District Council on the Pre-Application and an Outline Planning Application has now been submitted with a decision due in December 2022. A working group is being set up by the Town Council that will comprise New Milton residents, representatives of the Youth Trust, among others, to progress the project.

New Milton Youth Trust has been set up with a view to taking on the project, in collaboration with Town Council.

Timing: It is hoped that building work, on the designated site, will start in Spring 2023.

SpudWorks led a series of workshops with 50 young people aged 11-21 to inform the brief for the project. Many of the issues that concerned the young people related to social spaces, cooking facilities and the layout of different spaces to accommodate a variety of needs without feeling isolated. They thought it very important to consider how aesthetics of a space makes you feel and how that directly translates into how popular the youth centre will be.

Surveys and consultations will be led by New Milton Youth Trust but register at subscribe@newmiltontc.org.uk for alerts.

The Station Master’s house at the train station, built in 1886, was New Milton’s first brick building – thus providing the ideal location for a Heritage Centre for the Parish: No1 New Milton. The vision for the Heritage Centre is to help the community learn about the way local people lived using ancient artefacts, Domesday Book records, maps and everyday items – going through to the Great War, the Depression and World War II – a period of rapid growth for Old Milton, Barton on Sea, Ashley, Bashley and New Milton. The vision extends to the garden where a community garden is proposed, landscaped to enhance the station setting, with a place to sit and relax, or have a friendly chat with another visitor.

When launched, New Milton Heritage Society will be taking on the project management.

A funding plan is now in place, including a £20,000 contribution from New Milton Town Council for re-fit of the building including display cabinets.

South Western Railway is funding the renovation works to ensure the building is structurally sound. During renovation work, significant structural issues were identified. Network Rail is now in the process of redesigning the project work to resolve these issues. The Town Council continues to work closely with South Western Railway and Network Rail to ensure the building is safe and fit for purpose.

Local residents have been kind enough to donate towards the project, as well as sponsorship from Bradbeers, the Residents Association and Hoburne.

Work to resolve structural issues is expected to commence in January 2023 and, once finished, refurbishment works can be completed. By Spring 2023 all works and refurbishments should be completed and the building handed over to the Town Council. The launch is anticipated late spring/summer 2023.

A state-of-the-art Cultural & Community Hub in the centre of town. The Memorial Hall and an adjacent single storey building (an indoor bowling club) owned by the Town Council offer an opportunity to redevelop the whole site for this facility.
The intention is that the proposed development would be overseen by an independent charitable trust managed on behalf of the community.

Trustees of The New Milton Memorial Centre and New Milton Town Council as Trustee of the War Memorial Recreation Ground have worked closely together over the last 2 years to help drive this project, with the Town Council investing over £10,000 towards this project by way of legal and professional fees in taking this joint initiative forward.

On 9 July 2019, the two trusts issued a Joint Public Statement stating a Working Group was being formed to co-ordinate plans for the New Milton Community & Cultural Hub and to progress these in consultation with local people.

Discussions continue between The New Milton Memorial Centre and New Milton Town Council to consider the future plans for the Cultural & Community Hub.

The Town Council is represented on a Steering Group that includes West Hampshire Clinical Commissioning Group (WH CCG) and local General Practices with the aim of delivering a hub that streamlines the three surgeries and provides additional health services.

The Covid-19 pandemic has highlighted the need for improved health and wellbeing across the country and, while the development of a physical hub is a complex project, the Coastal Medical Partnership have been adding services for a more holistic approach. These include a Primary Care Mental Health Team, First Contact Physios for joint pain, a Frailty team which primarily focusses on the large care home population, a team of pharmacists and pharmacy technicians to support prescribing and medication issues, and a social prescriber who prescribes activities that promote mental, physical and social wellbeing – these can include gardening, cooking, walking and social activities. Over the coming months they are also looking to add more mental health support, and paramedics to support a new home visiting team.

As there is no NHS capital funding available to develop the vision for the HWB centre, rooms within existing sites at New Milton Health Centre, Arnewood Surgery and Barton Surgery are being reorganised to enable core services to be continued alongside vaccination services (flu/COVID) as well as local community health and wellbeing services.

The Town Council continues to collaborate with the WH CCG and the Coastal Medical Partnership to ensure readiness as and when a funding route is identified.

The policy aims to promote sustainable modes of travel by improving, enhancing and promoting better walking and cycling routes in and around the town, connecting residential areas to key destinations, as well as promoting leisure routes for informal recreation, such as dog walking.

The Town Council has set up a Green Routes steering group which benefits from the specialist expertise of a landscape architect commissioned from New Forest District Council. This also enables synchronisation with NFDC’s Mitigation Strategy work to connect new residential sites to green spaces.

Initial focus for the group is on walking routes from residential areas to town centre destinations. Routes can be a combination of:

The steering group has, so far, surveyed six walking routes and identified opportunities to improve the walking experience – such as provision of seating and litter bins, minor surface improvements and boundary features. The funding for enhancements to these routes has been allocated by New Milton Town Council and work commenced. Four of these routes use mostly public footpaths rather than pavements. These are:

In March 2022, the public were asked for feedback on four walks GR1, GR2,GR5 and GR6. The Survey was available online with paper copies available from New Milton Library, New Milton Town Hall, New Milton Memorial Hall, and New Milton Community Centre. A map and overview of each route was provided with the questionnaire. The feedback showed that routes were used to access shops, schools, train and work – with most responders also using for leisure/recreation/exercise. All the comments made, including potential green routes, will be reviewed by the Green Routes group.  Survey report.